The European Space Agency (ESA) has picked three candidates for its next middle class space mission, including Theseus, an early universe surveyor mission that includes Slovenian scientists from the Nova Gorica University and the Vesolje-SI centre of excellence. If picked, the mission is scheduled for launch in 2032. 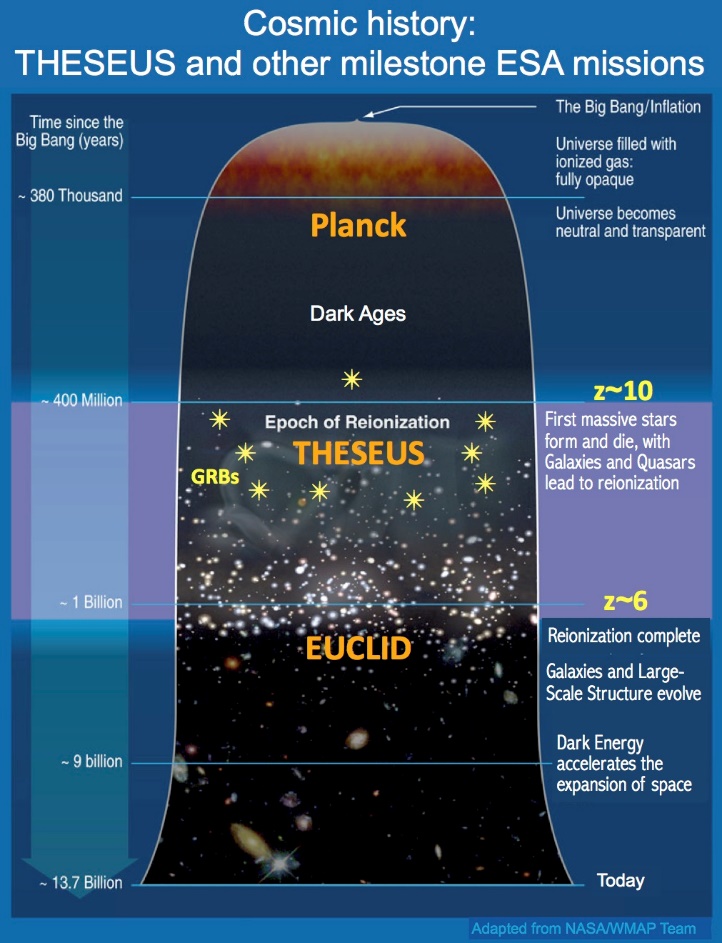 Theseus, an acronym for Transient High Energy Sky and Early Universe Surveyor, aims to monitor transient events in the high-energy universe such as Gamma-ray bursts across the whole sky and over the entirety of cosmic history, says ESA’s website.

It would make a complete census of gamma-ray bursts from the universe’s first billion years to help shed light on the life cycle of the first stars.

In addition, Theseus would also be able to follow up on gravitational wave observations by locating and identifying radiation from sources spotted by other detectors, adds ESA’s website.

Around 200 scientists from Europe, the US, Japan, China, Taiwan and South Africa are working on the project. From Slovenia, the Vesolje-SI centre of excellence and the Nova Gorica University participate with satellite and land communications technology development, and help with the definition of the mission with gamma-ray bursts expertise, respectively.

Theseus was picked as a potential mission of the ESA Cosmic Vision Science 2015-2025 programme. In addition to Theseus, Spica and EnVision projects have been picked as potential missions. The former is aimed at studying the origin and evolution of galaxies and the latter at studying geologic activity on Venus.

A total of 25 projects have applied for the programme, with the selected three moving forward to the next selection phase, told astrophysicist Andreja Gomboc, who works on Theseus

The final decision on which mission to launch is expected in 2021. According to Gomboc, much will depend on how well the project will be conceived technologically, on national space agencies’ backing and the costs, which cannot surpass EUR 550m for ESA.

Should it be picked, Theseus will be launched in 2032 and start collecting data in the low Earth orbit, at an altitude of about 600 kilometres.

You can read more about Theseus mission here.