The goal of meteorology research within the center of Excellence SPACE-SI is to advance application of satellite observations in weather and climate research in Slovenia. The research areas include

The meteorology research is carried out within the meteorology group at the University of Ljubljana, Faculty of Mathematics and Physics (UL-FMF). The Chair of Meteorology at FMF-UL (http://meteo.fmf.uni-lj.si) also carries out the only educational and research program in meteorology in Slovenia.

In order to support the advancements of meteorological applications in Slovenia, a real-time weather forecast is carried out in collaboration with the Meteorological office of the Environmental Agency of Slovenia (http://www.arso.si). The forecast is based on the downscaling of  the operational NWP model ALADIN-SI (http://www.cnrm.meteo.fr/aladin) by using the high-resolution non-hydrostatic WRF model (http://www.wrf-model.org). The NWP products are also used in the teaching process as well as in the educational activities devoted to the popularization of meteorology among the high-school students. Weather products are available online at http://meteo.fmf.uni-lj.si/?q=en/vreme. 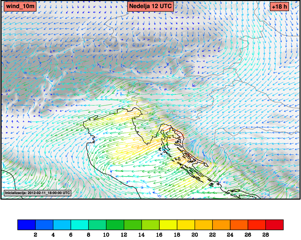 An example of the forecast output: 18-h forecast of the 10-m wind valid at 12 UTC on 12 February 2012. Figure shows severe bora winds along the Adriatic coast with typical regions of especially strong winds such as the Bay of Trieste and the northern Adriatic coast. Colors correspond to the wind speed in m/s.

SPACE-SI has been developing an integrative  presentation of weather information with other geoinformation within the Geopedia project, http://www.geopedia.si.

A further advancement is done by adding to this system the WRF-Chem model in order to produce a real-time forecast of the surface ozone (available at http://meteo.fmf.uni-lj.si/?q=en/onesnazenje) that is known to exceed critical levels in certain environmental conditions and weather situations (Zabkar et al., 2010). 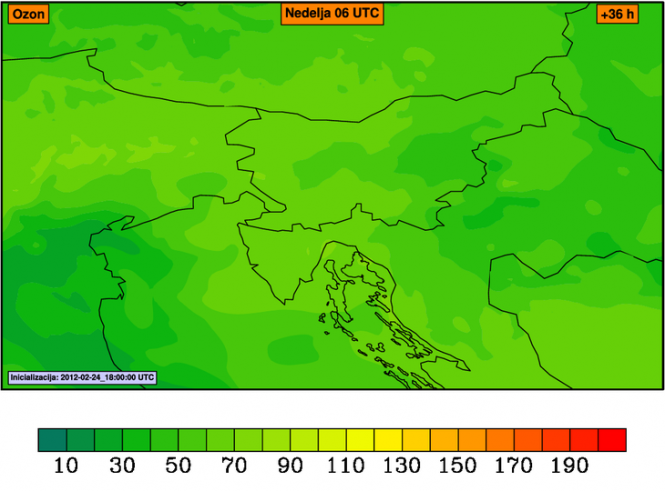 An example of the WRF-Chem forecast output: 36-h forecast of the surface layer ozone valid at 06 UTC on 26 February 2012. Colors correspond to the ozone concentration in micrograms per cubic meter.

NWP research in the data assimilation field is concentrated on the balance in the initial conditions and the spatio-temporal structure of the global forecast errors (e.g. Zagar et al., 2011). The research is carried out within international collaborations (e.g. NCAR-National Center for Atmospheric Research, Boulder, USA). The importance of new satellite observations is studied also in relation with the “Mesoscale wind profiles” project funded by the European Space Agency. The project is related to the ADM-Aeolus mission that would provide the first global observations of the wind profiles from space (http://www.esa.int/esaLP/ESAES62VMOC_LPadmaeolus_0.html).

Application of the satellite observations of precipitation

Satellite precipitation measurements have been successfully applied for the verification of the regional climate model (Skok et al., 2010). A similar application is currently been developing for the climate model simulations over Europe and Slovenia.  Another application of the satellite observations of precipitation related to the analysis of the global hydrological cycle has been published in Zagar et al. (2011).  In that study, the comparison between the precipitation produced by the latest reanalysis dataset ERA Interim (http://www.ecmwf.int/research/era/do/get/era-interim) and the TRMM precipitation dataset showed that the reanalyses still overestimate the tropical precipitation, especially over the land. In addition, reanalyses contain too strong so-called “double ITCZ” precipitation belts, a structure well-known from many climate models.

Average precipitation field according to the ERA Interim reanalyses (below) and the TRMM satellite precipitation product (above). The annual average is obtained for the 20-year period. The tropical region receives majority of the global precipitation and it drives the global hydrological cycle.

Current climate models, such as models that participated in the last report of the Intergovernmental panel on Climate Change (IPCC) have horizontal grid spacing larger than 100 km meaning that their results can hardly be directly used to discuss the climate and climate change processes for the complex regions of Slovenia. Similarly, existing regional climate simulations have insufficient spatial resolutions for resolving the orography impact on weather systems which define the climate of Slovenia, such as mesoscale cyclones and storms. Thus the models need to be adjusted to a higher resolution by carrying out the downscaling.

In addition to attempting to carry out the downscaling of the ERA Interim reanalyses in the climate mode, our research makes use of the latest European-scale project related to the regional climate modeling, the ENSEMBLES project (http://www.ensembles-eu.org/). An example of the outputs from ENSEMBLES for Slovenia is shown in figure that compares the 40-year (1960-2000) average of the annual mean temperature at 2 meters based on observations and the average of 14 models from the ENSEMBLES project. It can be seen that the model average reproduces well the observed climatology even though individual models are characterized by large deviations from the observed state. 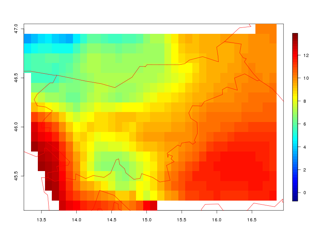 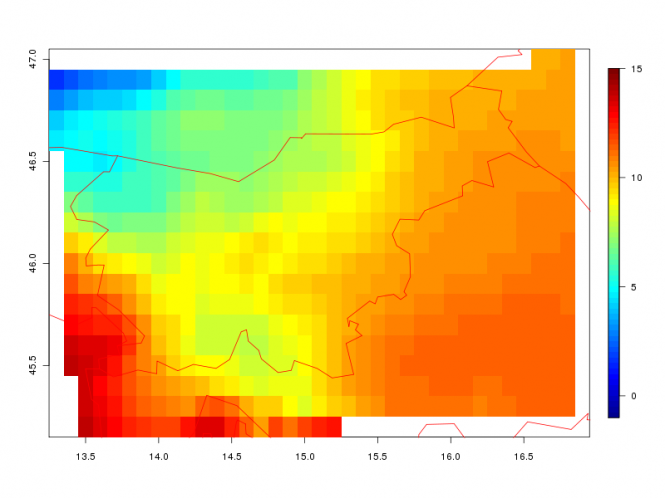 Average annual temperature (in oC) in observations (left) and average of 14 ENSEMBLES models (right) for period 1960-2000.